Have you ever experienced a “coaching moment” where an emotionally charged issue came up for the person you were coaching?

In a recent Certified Financial Services Coach Training Program course, Lyn Allen, one of our Master Certified Coaches at ClientWise, provided an example of one such coaching moment. In this example, the financial advisor being coached compared her interactions with her assistant to dealing with a “porcupine”. The assistant was incredibly difficult to be around and made the coachee feel as though she couldn’t approach her for help with even the smallest task. It was clear that the coachee had some negatively charged emotions surrounding her assistant that would continue to come up for her at work and during her coaching sessions.

Lyn explained to us, the “coaches in training”, that these moments would represent many things: Curiosity, discomfort, intrigue, and even a tempting road for us to head down as empathetic listeners to the coachees. However, while allowing the coachee to vent by lending a sympathetic ear is tempting, it doesn’t always achieve the objective of the coaching partnership, which is to work toward previously defined goals. The techniques below are helpful in terms of making the most of and staying on track during emotionally charged conversations, both in the coach-coachee relationship, as well as in relationships between managers and financial advisors, and financial advisors and clients.

Reframe your perspective from “getting them to” to “inviting them to”: Emotions can cloud situations for people. You may have worked through situations with coachees in which the answer is so clear to you that the desire to “get them” to see your perspective overpowers you to the point that it creeps into the language you use with a coachee. This is such a common inclination in coaching that Lyn has specifically created coach training materials on the importance of “inviting vs. persuading”. Even if you avoid using words that indicate persuasion, your tone will indicate otherwise. If you are mentally positioning yourself to “get” your coachee to do something, stop. Remind yourself that the goal is to help the coach work through their beliefs to come to this realization (or another realization entirely) on their own. Rather, you can achieve this by inviting the coachee to explore another perspective, or step out of his or her usual way of seeing things through open ended questions that very subtly allow the coachee to see things differently.  Saying things like “What if you were to imagine your work-life without the obstacles of this assistant, what would that look like?” are examples of this type of persuasion.

Preface the uncomfortable questions: Especially in emotionally charged situations, coaches are bound to ask questions that engage the coachee in ways that may make them uncomfortable. Anything that invites change is expected to come with some discomfort, but it is how you preface it that makes all the difference. Preparing your coachee by stating “I am going to pose a question to you that I think will clarify your situation to me, but it might feel a little uncomfortable at first. Are you okay with this?” allows the coachee to answer with a clear mind because he or she is not blindsided by your question.

Listen for the facts: In her organizational leadership and coach training materials, Lyn created a game called “Just the Facts” to emphasize the importance of this tactic. Especially in emotionally charged situations it's easy to "take the bait" and focus on the emotional aspects. Often this is the most compelling route, especially if it's a situation the coach can personally relate to, but it can also be the least productive in terms of working toward the intended goal. Avoid this temptation by finding a way to focus on the facts related to what the coachee presents. It is here you will find the leverage to progress toward the goal and avoid the rabbit hole of emotion that, at its best, will simply help the coachee blow off steam and, at its worst, will cause her even greater frustration by keeping her in the moment of that anger.

Tune into beliefs: Beliefs, like facts, are another factor that can be helpful. Sometimes in order to make progress with a coaching client, it’s necessary to make really impactful change by working with them to shift their perspectives or perceptions. Often the best way to achieve this is by first understanding how their current beliefs impact their actions. Listening for things like “I don’t think she’s capable of meeting me halfway” or “she’s never liked me” can give you clues as to those beliefs that might be limiting the coachee’s perspective and preventing some necessary change.

Check in throughout the conversation: Because the tendency during these emotionally heightened conversations is to let the emotion rather than rationality lead the course of conversation, it’s important to check in with the coachee throughout the conversation by saying things like “We began this call by figuring out how to overcome the issues you’re having with your assistant so you can make headway in the relationship. Now we are discussing the fact that you don’t think she ever liked you. Is this the direction you want to continue on with this call or would you like to stick with the initial objective of overcoming the issues that stand in the way of your relationship?”

Look for repetition in your clients’ behavior: Looking for repetition in the coachee’s actions can also provide valuable information as to how to move forward from the current challenge they are facing. Sometimes this is repetition within the same situation being addressed, or even patterns of behavior you've noticed from previous coaching situations. Saying things like "I've noticed that you often choose to handle things on your own rather than opening it up for conversation with others on your team. Is this something you think would be productive to look into as it relates to your goals, or no?” has the effect of calling attention to something without being accusatory or insisting that you head a certain direction with the conversation. Also, looking at repetitive behavior within the context of one coaching moment can have the dual benefit of realizing how it’s appearing in other places in the coachee’s life as well.

At first glance, these tactics may initially give you the feeling that you’re taking a slow road to helping the person you are coaching, but it feels slow to you as the coach because you are creating a situation in which the coachee has to step up and accomplish the work toward their goals through their own decision making process. You are putting the onus on the coachee, which might even feel strange or unproductive to them as well, because they aren’t accustomed to true coaching as it differs from consulting or advising.

With the increasing recognition and realization that coaching is a very useful tool for successful financial advisors, we are often asked how coaching is so... 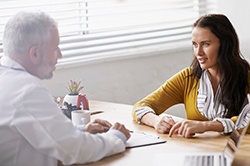 Over the last few years, there have been many articles published about the increasing economic power of women both here in the U.S. and globally. By 2020 (essentially...