“Neither a borrower nor a lender be: For loan oft loses both itself and friend.”

It’s one of the most recognizable and oft quoted lines in all of Shakespeare’s works, nestled right between two other pieces of sage advice that Polonius imparts to his son Laertes: “give every man thy ear, but few thy voice” and “this above all; to thine own self be true.” But while there’s a certain universal wisdom to those other two tenets, if you’re an advisor who’s seeking to rapidly and measurably grow your business, you’ll be well served to embrace rather than avoid the capital of others.

Today, the opportunities for inorganic advisory firm growth via mergers, acquisitions and lift-outs are unprecedented. In the first quarter of 2019 alone, there were 33 wealth management firm M&A transactions totaling $130 billion according to Fidelity’s Wealth Management M&A Transaction Report. Focus Financial alone consummated more than 20 separate M&A deals last year. Add to all this the seemingly weekly parade of breakaway advisors moving to independence either by establishing their own firms or joining existing RIAs, and it becomes rather clear that acquisitive growth shows no sign of abating.

Look back just ten or twenty years ago, and bank lenders had virtually zero desire to step into the advisory space. They saw an intangible business whose value was derived solely from cash flows and client goodwill, without any brick and mortar facilities, equipment or other tangible assets to serve as collateral. The major custodians attempted to fill the space and help fund acquisitions, but the limited resources they earmarked for those programs not surprisingly gravitated to the top revenue-generating firms on their platforms.

It was in 2016 that I first sat down with https://www.liveoakbank.com/investment-advisor-loans/ who began actively facilitating acquisition, working capital and succession loans for growing independent advisors since 2013. Today, the firm manages a financial advisory loan portfolio of more than $600MM and growing.

What’s more, they’ve opened the door for other capital sources who are now competing to continually raise the funding bar. Recently, https://www.skyview.com (formerly Succession Lending) surpassed the $100MM mark in funded loans and produced the following insightful and informative snapshot of their average deals to date – including multiples, deal structure and terms – which may be of great interest to those of you considering capital for expansion, acquisition or other growth strategies. 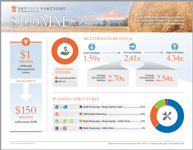 As an integral part of our enterprise value coaching, access to capital is critical not only to your ability to achieving The Fully Designed Future® you’ve envisioned by enabling you to build the team and infrastructure you need to succeed, but also to help ensure that you are able to exit well – providing continuity for your clients and team, while also monetizing the equity you’ve spent a lifetime to build.