5 Lessons from the Wisdom of Steve Jobs 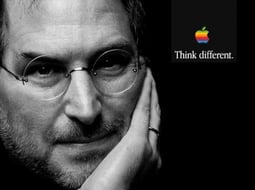 As we approach the 5-year anniversary of the death of Steve Jobs, he continues to remain one of the world’s most respected business visionaries and innovators. A creative genius and passionate non-conformist who never accepted conventional wisdom at face value, but instead rebelled against the inherent laziness of “business as usual.”

He was once aptly described as having the curiosity of a child and the mind of a genius. From the launch of the Macintosh and its Ridley Scott directed 1984 Super Bowl introductory commercial (considered by many to be the greatest TV commercial ever produced) to his iPod and iTunes-driven digital music revolution, as well as the creation of an entire new product category with the introduction of the iPad, he had an uncanny ability to sense what clients/customers wanted and needed, sometimes even before they themselves knew.

Perhaps most importantly, he knew how to get the very best out of the people he worked with, keeping them focused, motivated and constantly striving to improve on each and every detail of their job, no matter how seemingly unimportant. As wealth management team leaders, there’s much we can learn from his insights, drive and ability to inspire passion and loyalty among consumers around the globe.

The following is just a small sampling of some terrific insights from the man who always tried to do what he thought was right, not what was easy; and who never accepted the merely good when he thought great was achievable.

In an introduction to Apple’s new “Think Different” campaign, Steve talks about reconnecting with your core values and ensuring that you build your brand and focus your marketing around those unwavering fundamental values that define who you are and what you believe.

Steve’s 2005 commencement address at Stanford University serves as an earnest reminder to trust your intuition, always follow your heart and live each day as if it is your last.

A short discussion at the 1997 World Wide Developers Conference about the importance of being so focused on being willing to say “no” to ideas that may be good but not on point.

A two-part interview where Steve talks about the key considerations involved in building, guiding and motivating a team of “A players.”

And finally, a small piece of his 2010 D8 conference interview (near the end of his life) where Jobs speaks briefly but eloquently about empowering and trusting teams to innovate, solve problems and deliver.