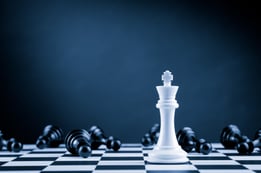 It’s rarely a cataclysmic event. Far more often, it’s a slow, cumulative effect – the impact of small, insidious behaviors that in and of themselves seem relatively harmless, but when combined and over an extended period of time, can eat away at the morale of your team and jeopardize the foundation of your business.

At ClientWise, we spend a great deal of time working with advisors and their teams to identify and model the habits and behaviors that distinguish some of the most successful interdependent teams. Over and over again, we continue to witness qualities and traits that distinguish the great teams from the ordinary – common intent and purpose, a shared vision, living the firm’s core values daily, expressing empathy for one another and clients, displaying compassion, and partnering around shared decision-making and shared success.

There’s a notion of extreme ownership in these teams – where every member feels and works as if they’re an owner in delivering for the client. There’s a sense of equality with each team member feeling empowered to make decisions, provide advice, and own the delivery of measurable results.

In 2016, Google conducted a broad study of team effectiveness and identified five key pillars of success:

Psychological safety where individuals feel safe in taking risks and allowing themselves to be vulnerable in front of one another;

Dependability where members of the team can be counted on to get things done on time and to the expected high standards;

Structure and clarity in which each team member has a clear role, plan, and individual goal they’re expected to achieve;

Meaning in that the work of the team is personally important to each team member; and

Impact so that team members feel as though the work they’re doing matters and will create meaningful change.

But team building isn’t just about modeling good behaviors. It also requires an ability to identify destructive and divisive behaviors early on, so they can be addressed and corrected before doing irreparable harm. In his book What Got You Here Won’t Get You There, Marshall Goldsmith identifies 20 of the most common insidious behaviors that can quickly eat away at the morale of your team and create an adversarial rather than a collaborative environment.

Don’t allow all your hard work in building a successful, interdependent team to be undone by seemingly inconsequential behaviors that could easily be corrected if identified and addressed early on. Be very attentive to the dynamics going on in your team. Communicate regularly with each and every member and encourage them to suggest ways in which team chemistry might be improved.

Remember that the best advisory firms in the business tend to distinguish themselves by doing a far better job of recognizing and nurturing the talent within their advisory teams. Rather than celebrating top producing individuals, shift your focus to celebrating top performing teams.

8 Ways for Financial Advisors to Dial Up Their Presentations

It’s funny. In the age of Twitter, multi-tasking, and short-attention-spans, financial advisors who can deliver powerful presentations really do stand out....

The Best Leadership Books from 2014

Team Leadership is an incredibly important and in-depth topic in today’s world. It’s so important to our financial advisor clients that most of the workshops we hold...